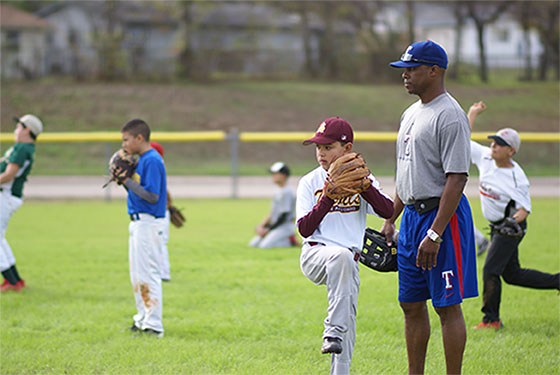 The Donald Harris Baseball Foundation is a 501(C)(3) Non-profit created by former Texas Ranger Donald Harris to promote opportunities for student athletes to become successful in life through discipline and teamwork. The foundation provides opportunities for kids and teen athletes to receive individual or personal one on one and group baseball/softball lessons (hitting, pitching, catching) taught by former Major League Baseball player Donald Harris. The foundation also offers grants for those who are not as fortunate to attend training sessions to help hone their skills to become better athletes.

The foundation, formerly located in Waco, Texas, has now relocated to the San Antonio, Texas area. Donald Harris participates in the community by attending and participating in various camps and appearances, where he serves as a motivational speaker and mentor to youth. He also personally provides one on one and group training sessions for student athletes.

I started a baseball foundation to encourage youth to live a positive healthy lifestyle through baseball and athletic interaction throughout the city. As a former Texas Tech Red Raider football player, I was able to enjoy the many challenges that came along with being a student-athlete. The most challenging obstacle was being a father and husband before stepping on the football field. As we educate our youth today, they must remember that life is a game within itself, and nothing is more important than family.
- Donald Harris
About
Donald Harris is a former number one draft pick (5th overall) for the Texas Rangers baseball team in 1989. He played in the Major Leagues from 1991-1993 for the Rangers primarily as an outfielder. In his 82 games, he had a .205 batting average, and 24 hits. He was also a Dallas Cowboys 12th round draft pick in 1992. After the Major Leagues, he also served for 8 years on foreign teams including teams in Caracas, Venezuela; San Juan, Puerto Rico; Sincelejo, Columbia; and Hermosillo, Mexico.